When I wake up in the morning I expect to find things (my watch or glasses for example) exactly where I left them the night before. And, I am told, if someone has moved your dentures during the night, it can be disconcerting.

The same goes for a sandy beach–when you return to a beach you expect it to be exactly where you left it, give or take a few feet allowing for discrepancies of memory.

This is not the case with Olas Altas beach in Centro, the Historico part of Mazatlán. It is not a reliable, stable beach. At first glance, it appears capricious–a child without supervision, a bit of a brat, and occasionally dangerous.

One of the smallest of the many beaches around Mazatlán, Olas Altas stretches from the roundabout just below the Piano Player sculpture on one end to El Shrimp Bucket at the other. On a map it extends for about 500 meters (that’s roughly a third of a mile in American) but to say it’s 500 meters long is misleading. The actual sandy portion is usually not much more than half of that.

What it lacks in size is made up for by its waves. Olas Altas means “high waves” in Spanish. It’s the waves that make the beach interesting and not just for surfers. Colored flags alert sun-worshippers to the perils of currents, jelly fish, and the like.

When we return to Maz each fall, the sandy beach is found sitting at the north end of Olas Altas leaving only sharp rocks at the other end. As winter progresses, the beach migrates to the South perhaps in symbolic sympathy with the visitors who have left the nasty cold for the charms of Mazatlán. Then, like the Snowbirds, as spring approaches the sand starts to slosh back to the North where it hangs out for the summer. This annual shuttling to and fro is like watching a badminton match in slow motion; very, very, slow motion–not even at a turtle’s pace. 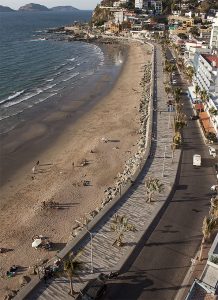 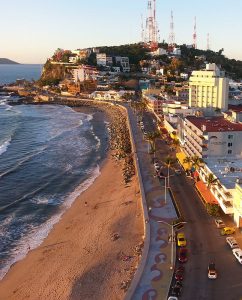 The beach as it will look in a month or so.

Lynn and I frequently walk along the Malecon (a boardwalk made not of boards but of concrete and pavers) enjoying waves rolling onto the Olas Altas shore but we aren’t the only creatures making an annual trek to experience these shifting sands.

One evening, as we strolled home, we saw a crowd had gathered and a police officer was standing guard on shore. Our initial reaction was that some poor soul had succumbed to the high waves but as we drew closer we could see a large turtle scraping sand to prepare a nest for her eggs.

Olive Ridley Sea Turtles are not exactly nimble on land and it takes her a while to dig, discover she doesn’t like the spot, relocate, and dig some more. It reminded me of Lynn getting me to move furniture about the living room.

The officer was there to ward off gawkers from disturbing the mother as well as ensuring no one steals the eggs of this endangered species. Once laid, her yearly duty done, the mother swims back to sea.

The following morning as I was making an omelette (let’s be clear – out of fresh chicken eggs from El Mercado) I contemplated the mother’s return next fall. In the meantime her eggs have been harvested for incubation at a sanctuary and I can look forward to the eventual sunset release of hatchlings on the beach. 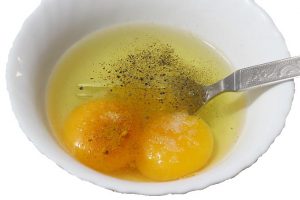