Last night, Lynn was drawing the curtains in our den and gave a yelp accompanied with, “What is that?” It’s her modus operandi whenever confronted by a spider. My role is to ask, “What’s the matter Dear?” With that, I am compelled to get up and capture the spider for release outside or, in very grave circumstances, dispatch it.

It was late evening, I was settled in and not responding appropriately, so she does, “WHAT-IS-THAT” a couple more times. Each repetition becoming more hysterical. Heaving myself out of the armchair, I stared up at a huge furry insect in the curtain folds or was it a mouse wrapped in a brown blanket. Lynn answers her own question – it’s a bat, dangling upside down, wings cloaking its tiny body, hind feet clutching at the curtain fabric. 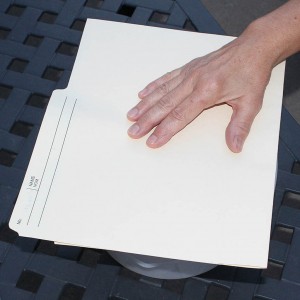 Going outside to our upper patio, we removed the manila folder cover, watched the bat tentatively look around, fly into the air, circle about, and then head west. 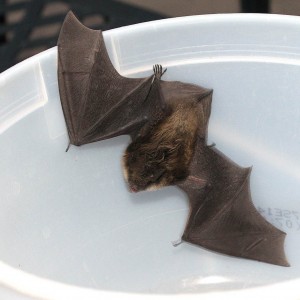 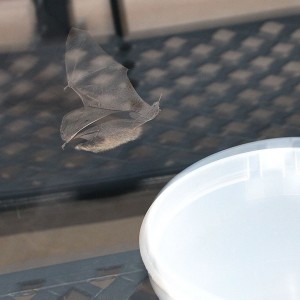 It was one of those feel-good, catch-and-release scenarios so popular on the Nature or Discovery TV channels.

The bat was OK but were we? I mean really; you have to ask – for how long has Lynn allowed the bat to be in our home and have we been bitten while sleeping in our beds? How long does it take for the effects of rabies to kick in?

In movies, vampires only bite a woman’s throat but you can’t rely exclusively on the movies for your medical information. I tried to do a thorough examination of Lynn to see if she had bite marks anywhere on her body but she (dare I say it) batted my hands away, accusing me of ulterior motives. So much for me trying to discharge my husbandly duties in an effort to ensure her welfare.

In any event Lynn has taken to patrolling the house for bat sightings, telltale droppings of bat guano, whatever. I’m just watching to see if she develops an aversion to sunlight.

PS my apologies for the poor picture quality but it was at dusk and focusing was a problem.

The bat looks like the common Little Brown Bat (Myotis lucifugus). Despite having an eight-inch wingspan, an adult only weighs one third of an ounce. White-nose syndrome is a fungal condition that has been attacking and decimating bat colonies across North America in recent years. Good news – this bat has a brown nose so at least we are OK on that front.