Even if you can’t read music, you know this tune.

You often hear the tune for its comic effect in cartoons.

Mexicans have kept the tune but used creative license with the words. In Mexico, the tune is reserved for enemies or very close drinking buddies.

Recently I was with our architect, Musi (short for Manuel Eduardo Guerrero Osuna), when he dropped in on another client–a woman from Canada. After no response to the doorbell I gave a hard “Shave and A Haircut” rap on the front door.

That jolted Musi who looked at me with consternation and said, “Hey Ken, what are you doing?”

He explained the words that go with the tune in Mexico. Independent linguistics experts (i.e. a couple of construction workers down the street) have now confirmed his clarification. Instead of “Shave and A Haircut”, it’s a vulgar expression indelicately encouraging the listener to have unnatural relations with their mother then capping it off with a derogatory reference to a private part of the listener’s anatomy.

Musi seemed concerned that I may have jeopardized his client relationship. Makes me nervous using Google Translate.

On a similar note: Feliz Año Nuevo is the appropriate greeting for Happy New Year. If you are casual or can’t find the ~ for the “ñ” character on your keyboard then instead of “Año” meaning “Year” you end up typing “Ano” meaning “anus”.  Only a handful of people can pull off that greeting gracefully (think of a proctologist after completing a successful hemorrhoid operation.)

If you followed Rudolph from a previous blog – I put him out for garbage pickup but by the time I had finished my coffee he was gone–bolted- perhaps to a new family where he will fulfill his destiny. 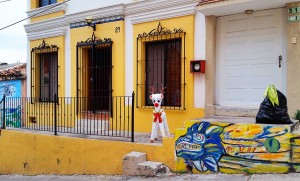 Rudolph on the run.

March 18, 2016: Lynn and I visited Tlaquepaque (about a 6 hour drive SE from Mazatlán) and I tapped out the “Shave and a Haircut” tune in front of the desk clerk. He confirmed that it was “very rude”.

2 comments on “Shave and A Haircut”