Maria del Carmen Gomez Gonzolez (aka Carmelita), with the help of her husband, Miguel, and their dog, Bongi (that’s Spanish for bungee cord – no idea what he did to acquire that moniker), runs a store out of her home, right next door to us. 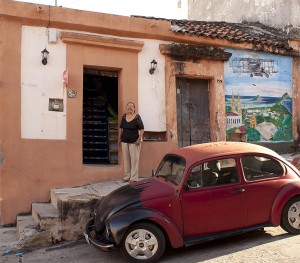 Carmelita in front of her tiendita

Now there’s a corner store, known as a “tienda”, a bit further down our street, across from the library plaza, that sells drinks, vegetables and dry-goods. When Mexicans see an even smaller version of something, they often add “ita” to the end of the word.

Carmelita’s store is tiny; it’s a really tiny, tiny store. All she sells are soft drinks out of a cooler no bigger than an apartment sized fridge. Her store is so small it’s downgraded from tienda to a “tiendita” status. It may even qualify as a tiendita-ita, if such a word exists.

Don’t get me wrong, Mazatlán has mega grocery stores that are gigantic. One chain is conveniently called Mega—no gringo translation needed. Anyway, enough of the Spanish lesson.

Every now and then a Coca-Cola van lumbers up our narrow calle, stops at Carmelita’s and drops off a dozen bottles. The economics are not obvious to me. 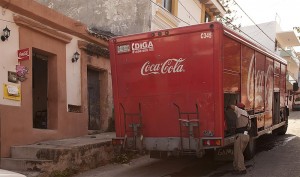 P. S. the VW bug in the first photo is constantly being refurbished by their son, Miguelito—that’s right, he’s a smaller version of his father, Miguel. More Spanish lessons; because he is male the tag ending is “ito” not “ita”.

2 comments on “Carmelita and Her Tiendita”