It’s about testicles but is this post also about medical tourism? People are coming to Mazatlán for dental work, hip replacements, cosmetic enhancements, the whole bit. Is that it?

Perhaps my turmoil is a reflection of the man’s own confusion. Should this posting focus on gender identity, confusion and re-assignment–all very much front and centre in the news these days. But re-assignment is not a new thing; at least not in Maz. 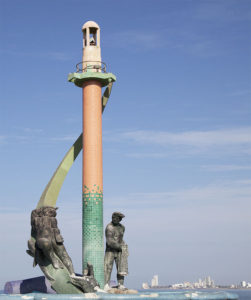 It’s Mazatlán’s Fisherman’s Monument that perplexes me. More formally known as La Alegoría Marina (The Marine Allegory) and colloquially referred to as “Los Monos Bichis” (roughly translated as “The Naked Ones”.)

You can’t blame The Fisherman for being confused. When first unveiled, the presiding mayor (known as “El Presidente”) felt The Fisherman’s testicles were too large so he ordered them removed. Citizens whispered that a certain personal inadequacy and a type of envy on the part of El Presidente motivated the surgery. These mutterings resulted in a reinstatement, of sorts. They came back smaller. Who’s ever heard of medical procedures for ensmallments in that department?

The Fisherman would have been better off not complaining. Another change of regime; another El Presidente; another decree. A vanishing act and all of The Fisherman’s wedding tackle was removed.

A later regime, another El Presidente, and a partial reprieve. He got a penis back but only the penis. I suppose the moral is: be thankful for small mercies.

As we know him now

Medical records are hard to access in Canada and it’s no easier in Maz. If truth be known, I’m not certain as to the exact timing/sequence of events but all sources agree; it went back and forth like ping-pong balls.

So much for The Mutilated Man, what about The Woman? 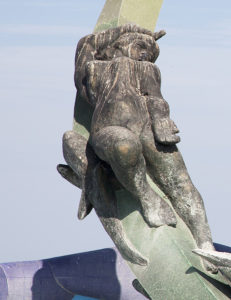 The Fisherman has a role; he’s a fisherman. What is her role? Homemaker? What drove her to hang about in such a pose with her hand out? The Fisherman’s medical condition may go a long way in helping us understand The Woman.

Travel guides are circumspect when it comes to describing the monument and The Woman. A typical article talks about the monument symbolizing “… his faithful (and beautiful) woman awaiting his return”.

What is it about the monument that conveys fidelity? To paraphrase Shakespeare, methinks the lady doth protest too much.

I suspect if the Fisherman came home after a long fishing trip to learn his wife has been reclining with her hand out he might become cranky. On the other hand, the medical procedures inflicted on the poor chap may leave him more tolerant.

My interpretation of The Woman is not unanimous. Some in Maz think it is a slander on the good lady’s character BUT other residents believe “Allegory” in the title refers to the depiction of the world’s two oldest professions–The Fisherman and The Fisher of Men.

P.S. Recently the Mazatlán Municipal Director of Planning announced a project to upgrade the monument by expanding the walkway around it. He was quick to point out there is no intention to fiddle with the couple. No doubt, a great relief to The Fisherman.

2 comments on “Now You See’um”