Insights from the Mexican culture – How to compete in an overcrowded market – Specialization.

In Mexico, tacos are soft tortillas made from maize (that’s corn – sort of) with a filling and then you finish it off with chopped tomato/raw onion/grilled onion/pickled onion/cilantro/radish/cucumber/peppers/guacamole/hot sauce/really really hot sauce/fresh squeezed lime – whatever strikes your fancy 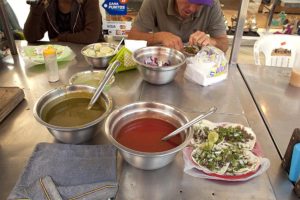 If a downtown Mazatlán street has a street corner then in all likelihood it’s occupied by a stand (sometimes more than one.) 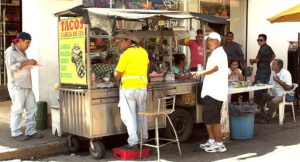 Each taco stand is known for the type of fillings it carries. Some carry a full range of beef, pork, chicken and vegetarian. Other specialize in just seafood tacos or just beef tacos.

How does one entrepreneur compete in a market saturated with the everyday?

Specialization – that’s how. With the case in point they serve only brains, eyes, tongue, and cheeks.

For the last 60 years one family has operated a stand at the corner of Aquiles Serdan and Genero Estrada in downtown Centro specializing in meat limited to the head of a cow. 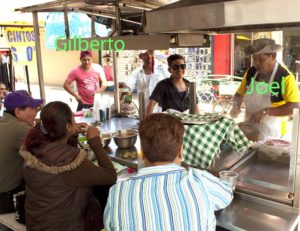 Gilberto took over the family stand 5 years ago. Joel has has been cooking here for the last 8 years.

Sixty years in the business says it all.

Brain Tacos: If you think about it, it’s a no-brainer (apologies for the offal pun.) Unless you are a Zombie, eating brain has little to commend itself. The taste just isn’t there and the texture is mushy. On the other hand, if you’re a fan of tapioca pudding then this may be a hit with you. One last note to ponder; the cholesterol level is off the charts. Brain has over 30 times more cholesterol compared to lard and they taste about the same.

Eyes-On-A-Taco: I don’t see the point – watery with no flavour and the rest is just gristle. Enough said.

Tongue Tacos: Now the tongue is a tasty morsel – Two thumbs up. Just pile on the toppings.

Full Disclosure: no comps for this reporter. I had to pay for each taco and ate all four.

3 comments on “Heads Up”