Anyway, as the crow flies, The Tropic of Cancer is 25.34 km (15.75 mi) north of our house in Mazatlán. I can’t say if a crow has ever flown from our house to the line but we have a species of crow (Sinaloa Crow) that is endemic to this part of the country so it could have happened.

Speaking of the line, if you want a Kodak moment, you can drive North of here on Highway 15 and check out a sign marking the location. Note: you won’t see a line on the ground, just the sign. 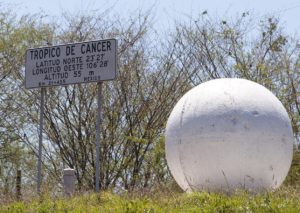 For the metaphysically inclined, at high noon, during the Summer Solstice, if you stand exactly on the Tropic of Cancer the sun will be directly overhead. Doing it for very long will give you this feeling of–sunstroke.

All of this is to tell you that Mazatlán just squeaked in under the line. It’s officially located in the tropics.

I don’t know about you but I’ve never associated the tropics with winter, at least not until we got a house here. Residents of Maz talk about how cold it can get in the winter. Cold? I’m from Canada! Canada has its own imaginary line–it’s called the “Arctic Circle”. I know what cold is and it isn’t something that happens in Maz.

BUT–if you’ll indulge me during a slight digression–in school I recall a student complaining about how hard it was to find a decent shoeshine stand. Up to that point in my short life I was not aware of this problem. On reflection I understand how he could find the situation frustrating but as a student living in a $75 a month apartment with a leaky roof I wasn’t bonding.

In a similar vein, if you’re living in the world’s largest freezer and someone in the tropics tells you they’re cold, as hard as you might, can you really feel their pain.

Let’s be frank. Do you have a tiny suspicion they’re just rubbing it in. A not-so-subtle way of poking you and saying they live where it’s warm and you don’t.

If you have a niggling doubt that they can’t be serious about being cold then let me put your mind to rest. Maybe they are but maybe they aren’t. For this insight I look to some of the nationals this past week when the thermometer in Centro hovered at 19C (that’s 66F in American.)

The Nationals don’t have anyone to call and lord it over about being in the tropics. Notwithstanding, they still dress their kids in winter hats and protect their pets from frostbite. 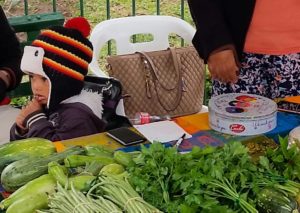 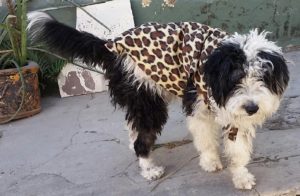 Hard to believe this dog needs more protection but, a leopard skin print???

BTW – One of the benefits of living in the tropics is that I wear sandals all the time. I haven’t had to grapple with the problem of where to find a good shoeshine stand BUT if I should become distressed over the difficulty, the main plaza would be a good place to start. 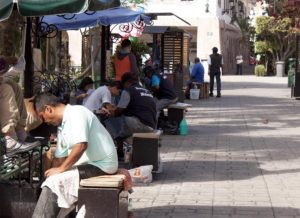 They do offer to polish sandals.

A long-time and close friend suggested a hint of hypocrisy in this post. He noted that I’d complained about the cold – what do you expect, it dropped to 19C (66F) and Lynn wore an extra sweater on the day I took the photo of the little boy in a winter hat with ear-flaps.

I’ve become one of them–a Mazatleco who shivers at the thought of the mercury dipping below 20C (68F.)

6 comments on “Winter & The Tropic of Cancer”